What are Bullish pattern and Bearish Bearish reversal patterns?

Here are some Bullish pattern Candles;

Here are some Bearish pattern Candles; 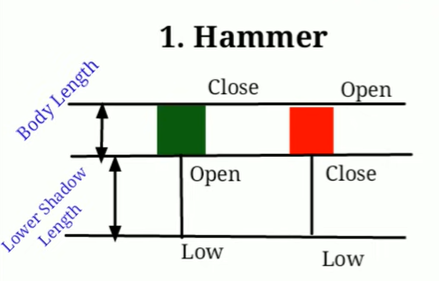 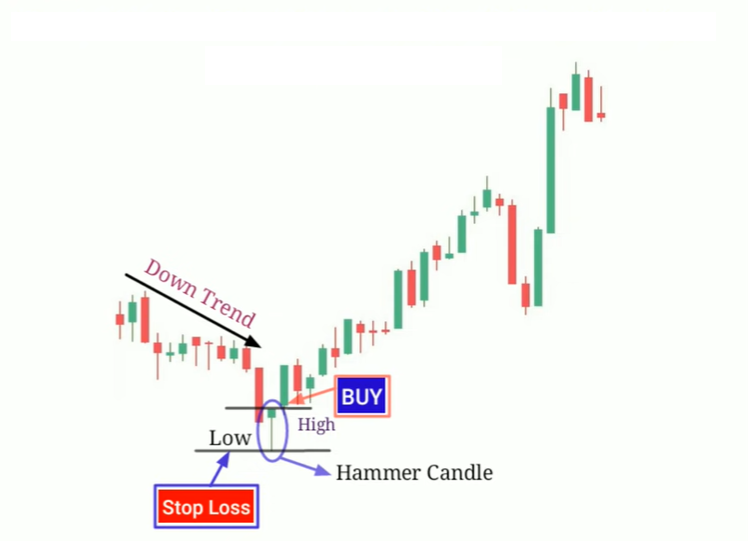 A candlestick with a long lower wick at the bottom of a downtrend, where the lower wick is at least twice the size of the body. A hammer shows that even though the selling pressure was high, the bulls drove the price back up close to the open. A hammer can be either red or green, but green hammers may indicate a stronger bull reaction.

Inverse hammer is just like a hammer, but with a long wick above the body rather than below. Similar to a hammer, the upper wick should be at least twice the size of the body. An inverted hammer occurs at the bottom of a downtrend and may indicate a potential reversal upward. The upper wick shows that price stopped its continued downward movement, even though the sellers eventually managed to drive it down near the open. As such, the inverted hammer may suggest that buyers soon might gain control of the market.

This candlestick pattern is formed by a long and red bearish candle followed by a long green candle. It occurs at the end of a downtrend. There is a gap between the opening and closing prices of both candles. Also, notice that the green candle is closing about half-way up the body of the bearish candle.

This pattern reveals that though the start is bearish, buying pressure surges during the course of the second candle. This means that Bulls have a considerable interest in buying at the prevailing price

A bullish harami is a long red candle followed by a smaller green candle that’s entirely contained within the body of the previous candle. The bullish harami can unfold over two or more days, and it’s a pattern indicating that selling momentum is slowing down and might be coming to an end.

The Morning Star pattern is formed by three separate candles at the bottom of a downtrend. The first bearish candle is quite long, while the second – known as the star – has lengthy wicks with a short body. The star candle closes below the previous candle. However, the third candle shifts bullish closes directly above the first’s midpoint. This pattern shows that the downtrend pressure is decreasing and beginning to shift into an uptrend.

The hanging man is the bearish equivalent of a hammer. It typically forms at the end of an uptrend with a small body and a long lower wick. The lower wick indicates that there was a large sell-off, but bulls managed to take back control and drive the price up. Keeping that in mind, after a prolonged uptrend, the sell-off may act as a warning that the bulls might soon be losing control of the market.

It indicates that the market reached a high, but then sellers took control and drove the price back down. Some traders prefer to wait for the next few candlesticks to unfold for confirmation of the pattern.

A bearish engulfing pattern is a technical chart pattern that signals lower prices to come. The pattern consists of an up (white or green) candlestick followed by a large down (black or red) candlestick that eclipses or "engulfs" the smaller up candle.

The dark cloud cover pattern consists of a red candle that opens above the close of the previous green candle but then closes below the midpoint of that candle.It can often be accompanied by high volume, indicating that momentum might be shifting from the upside to the downside. Traders might wait for a third red candle for confirmation of the pattern.

The bearish harami is a long green candle followed by a small red candle with a body that’s entirely contained within the body of the previous candle.The bearish harami can unfold over two or more days, appears at the end of an uptrend, and may indicate that buying pressure is decreasing

An evening star is a stock-price chart pattern used by technical analysts to detect when a trend is about to reverse. It is a bearish candlestick pattern consisting of three candles: a large white candlestick, a small-bodied candle, and a red candle

The bearish kicker is a two-candle pattern that starts with a large bullish candlestick higher (white or green depending on the charting platform) then a second large bearish candle that gaps lower in price and keeps going to the downside.